skip to main | skip to sidebar

I just read an excellent "explainer" at Vox that lays out how the Dodd-Frank legislation is addressing the issues of the 2008 financial melt down.  Here's a sample:


The Dodd-Frank bill has three pillars... :

And on his blog at Mother Jones, Kevin Drum, notes that the Fed has ...


announced new capital requirements for large, systemically important banks that could devastate the financial system if they failed. These new requirements can be met only with common

equity, the safest form of capital, and are in addition to the 7 percent common equity level already required of all banks:


Update: Better Markets has a PowerPoint presentation on the 5th anniversary of Dodd-Frank available for download here: http://www.bettermarkets.com/cocpowerpoint

Posted by Getting Informed and Involved at 2:20 PM

Remember the 2008 financial meltdown? It seems the problem was and is not bigness, it's riskiness.

The whole thing is well worth reading, but I'll share the last paragraph here.

"Grunwald points out that overall, Dodd-Frank is working by raising the capital requirements for big banks in order to protect against the risks. And then he goes on to talk about ways that the current regulations could be strengthened. But ultimately, vigilance is what will be required.


Risk has a way of migrating to the path of least resistance…What’s safe to predict is that risk won’t go away. The goal should be to monitor and manage it, not to eradicate it. Financial reformers often make grand pronouncements about how this or that reform will eliminate the risk of meltdowns and bailouts, but those risks will remain as long as human beings are susceptible to manias like the one that inflated the credit bubble before the crisis and panics like the one that nearly shredded the system during the crisis—in other words, as long as human beings are human."

Vigilance.  The same thing that's required to ensure that we remain a democracy.


Posted by Getting Informed and Involved at 5:10 PM

Here's What the Budget Proposed by Republicans Is Meant to Do

Economist Paul Krugman called them the trillion dollar fraudsters.  What's he referring to?  The Republicans who have proposed budgets that further shift the tax burden to those in the middle and low income brackets while putting earned benefits in jeopardy.

It's time for Republicans to own up to the impact of their proposals and stop pretending that making the rich richer will benefit all of us. Trickle down has never worked - it didn't when the shift started in the Reagan administration and it hasn't since.  Just look at where the US stands in terms of inequality of income - in 2010 the top 1% got 17% of the income in the US, and the picture is worse when it comes to concentration of wealth.
(See the sample graph below. More at http://www.economist.com/blogs/graphicdetail/2014/11/daily-chart-2) 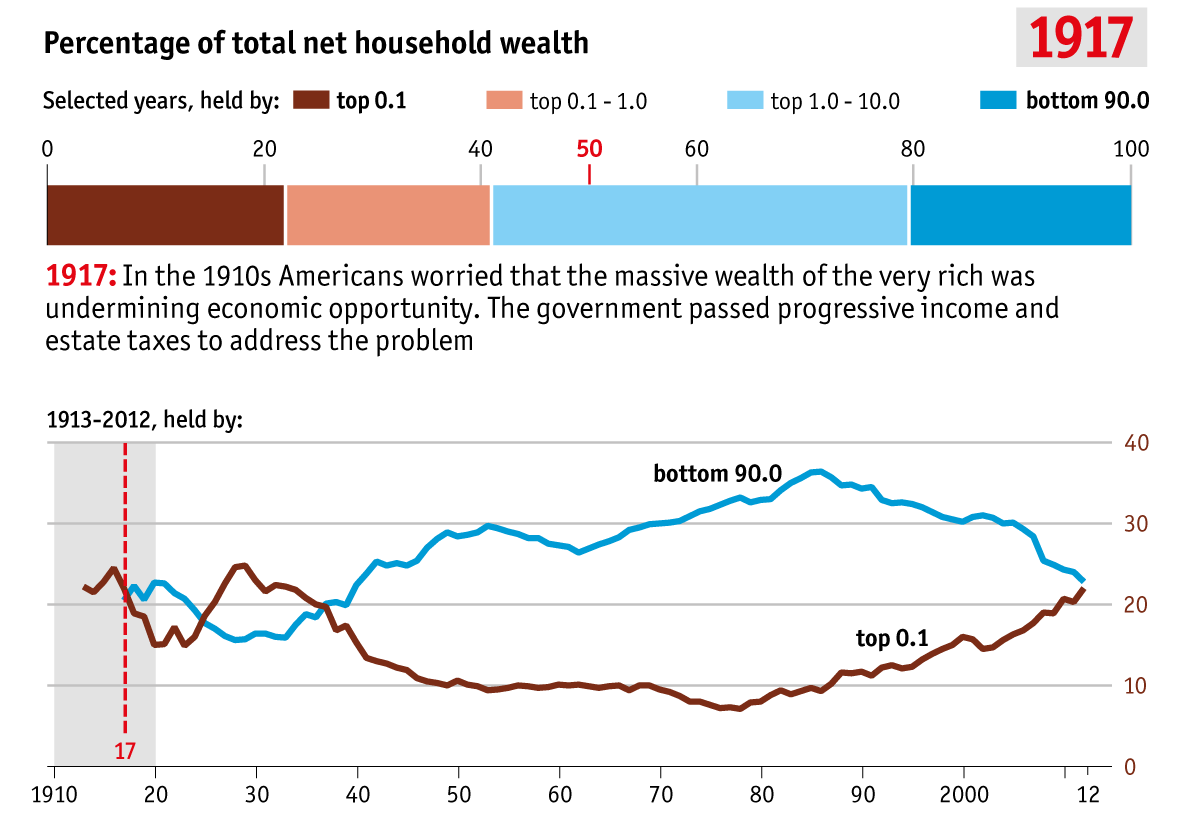 Source: An article in The Economist.

A NEW paper by Emmanuel Saez of the University of California, Berkeley, and Gabriel Zucman of the London School of Economics suggests that, in America at least, inequality in wealth is approaching record levels.

Note: the upward trend in concentration of wealth in the top one-tenth of one percent of the population beginning in the late 1970's and the corresponding drop in net household wealth of the bottom 90%.  The reality has been an upward transfer of wealth from the bottom 90% to the .1% not "trickle down".  Despite what you've heard from Republicans and others, this is not the natural order of things resulting from the free market.  It is the result of deliberate policy decisions - and Republicans are calling for more of the same and worse.

We need to call them out on this.  The Republican Congress won't look out for the interests of the 90% unless we make them.
Posted by Getting Informed and Involved at 1:23 PM

An Idea Whose Time Has Come?

It appears that the "no tax" Republicans in charge of state governments are "no tax" only to the benefit of the richest in their states.  Here's a link to a report on the situation and recommendations for how to fix it.

Taxing Top Incomes at the Same Rate as the Middle Class Could Fund Critical State Priorities, Including Education, Infrastructure, and Public Pensions

Posted by Getting Informed and Involved at 12:55 PM

Use your vote to show that our country is NOT for sale. Watch for and disregard ads sponsored by these groups.  They have a hidden (or perhaps, not-so-hidden) agenda.
(Source: http://www.washingtonpost.com/blogs/the-fix/wp/2014/09/04/one-out-of-every-10-ads-run-in-the-2014-election-have-ties-to-the-koch-brothers/)

These groups are heavily funded by the Koch brothers who are notorious for selecting politicians who will vote in ways that disregard the public interest and promote the Kochs' business interests.

The Koch brothers have made their fortunes in industries that pollute. (Source: http://www.inspirationgreen.com/koch-brothers-products.html)

University of Massachusetts at Amherst’s Political Economy Research Institute, shows Koch Industries as the nation’s 14th largest polluter/emitter. But with their 2013 purchase of Molex, Inc they will slide closer to the top. See detailed emissions breakdowns - www.peri.umass.edu/toxic_index

Koch Industries spent a total of $37.9 million on oil and gas lobbying during 2006 to 2009. www.sourcewatch.org

According to the International Forum on Globalization, Charles and David Koch are America’s single largest source of private money for attacks against environmental protections. They have spent over $643 million to block or rollback legal protections for clean air, clean energy, clean water, and other environmental issues through sketchy scientific research, lobbying lawmakers, contributing to electoral candidates’ campaigns, media manipulation, etc. kochcash.files.wordpress.com

Petroleum coke (a byproduct of tar sands refining) has been irritating numerous residents in both Chicago and Detroit. Koch Carbon is storing enormous quantities of petroleum coke on the banks of Chicago’s Calumet River and Michigan's Detroit River. The ever growing piles await processing, but refineries cannot keep up with the quantity. thinkprogress.org

I repeat: Use your vote to show that our country is NOT for sale.

Posted by Getting Informed and Involved at 12:32 PM

Is the US No Longer a Democracy?

Severe financial inequality and "money as speech" = US oligarchy (rule by the richest few).

Among the blog posts worth taking time to read are:

The only way to maintain our democracy is for ALL eligible voters to get informed and VOTE.

Posted by Getting Informed and Involved at 1:55 PM

When Corporations Abandon Their Corporate Citizenship

Talk about not paying a fair share of taxes for the benefits received.  Some corporations who do most of their business in the US are scheming to "locate" in other countries to avoid taxes.

Norm Ornstein explains how in this piece from The Atlantic:

http://www.theatlantic.com/business/archive/2014/07/corporations-still-not-people/373889/
Posted by Getting Informed and Involved at 3:09 PM

Getting Informed and Involved
I created my first blog Involved Voters in July 2008 while living in SE Michigan to inform local voters and support Democratic candidates. I currently live in New Jersey, having recently moved from 5 years in California. A couple of years ago I shifted the emphasis of the blog to focus on educating Involved Voters about reforming the US financial system and getting big money out of politics. With the election of Donald Trump as POTUS, I decided to create a second blog for the purpose of holding his administration accountable.